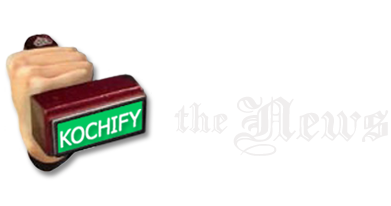 Kochify The News is a project of Forecast the Facts, a grassroots organization dedicated to ensuring that Americans are told the truth about climate change. The Koch brothers have done as much as any two people in the world to deny the reality of climate change. Now, they want to use their oil and gas billions to purchase the Tribune Company’s 8 major newspapers, including the Los Angeles Times, Chicago Tribune, and Baltimore Sun. We created Kochify the News to dramatize what would happen if that sale went through. But while the site is intended as satire, this issue is no laughing matter.

The newspapers up for sale have a strong reputation for journalistic excellence, and particularly for reliable climate coverage. By contrast, the Koch brothers have a long history of manipulating truth for their own personal gain. On climate change alone, the Koch brothers have donated at least $67 million to organizations that promote climate denial and given millions more to climate-denying politicians. Koch-founded Americans for Prosperity has labeled climate science “the biggest hoax the world has ever seen.” By perpetuating such egregious falsehoods, the Koch brothers have manipulated the national discourse and bought influence in Washington to allow corporations to continuing polluting our atmosphere. The Koch brothers have also donated millions more to organizations and politicians that attack campaign spending limits, dismantle workers’ rights, promote discriminatory voter ID laws, restrict access to health care, and increase income inequality.

All of this makes the Kochs singularly unfit to own the Tribune Company’s respected newspapers. It’s not just that they are anti-regulation or anti-worker or anti-government: they’re anti-fact. The Kochs would use these newspapers to spread misinformation that boosts their personal profits at the expense of the millions of Americans who rely on Tribune Company papers for accurate, unbiased news coverage. Just recently, we got a preview of what Koch ownership of the media would look like. In the past several years, New York’s public television station, WNET, practiced disturbing self-censorship in regards to two documentary films critical of the Kochs because David Koch sat on their board and was promising a major donation. The Kochs also publicly criticized one of the films even though they hadn’t even watched it. Imagine what would happen if the Kochs owned WNET — or the Tribune Company papers — outright.

All of this is why it’s so important that Tribune Company CEO Peter Ligouri, as well as the Company’s largest shareholders — Oaktree Capital — refuse to sell to the Koch brothers, and instead find a buyer who will carry on the Tribune Company’s tradition of journalistic integrity. More than 500,000 people, including thousands of Tribune Company subscribers, have signed on to this campaign. Please take a moment to join them.

"Don't sell the Tribune Company newspapers to David and Charles Koch, or any other climate-denying propagandists."

A project of Forecast the Facts. Learn more | Built by PGM